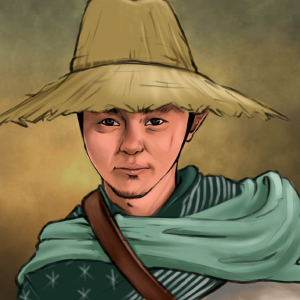 Eyremoth is the bastard son of a tribal elven mother and a human merchant father. His mother raised him in an oasis village in the middle of Ignir. As a half-elf, he was not given a traditional elf name. Instead his name is a portmanteau of the month he was born, and his curious attraction to light as an infant, likening him to a moth. When he came of age, his tribe refused to fully accept him as one of their own. He opted to set out on his own and wander the continent.

In his travels, he visited many parathistic temples and endeared himself to the monks who respected his independent spirit. They taught him focus, serenity, and patience. In time, they awarded him with honorary monkhood.

Eyremoth would support himself the next few years by escorting travelers across Ignir's harsh deserts. His business would reach a slump until the arrival of a certain chef.

Rosalynd Rosenthal : Worked for Rosalynd as an escort to Tabak and negotiated for higher pay due to expertise. After Rosenthal's betrayal, Eyre forgave him and collected only his promised reward. Eyremoth chose not to get involved when it was revealed Rosalynd was transporting a slave.
Hemlok Benrato : One of the escorts Eyre worked with. Telepathically messaged Eyre to come back during the Ambush at Tabak Pass. Eyremoth took this as a message from Elenora to seek retribution and admitted as much to Hemlok who did not reveal the true nature of the voice.
Stranger from Pomfae : The individual Eyremoth helped save from the elements. Eyre recognized the seal of Pomfae but did not get a chance to question him further.