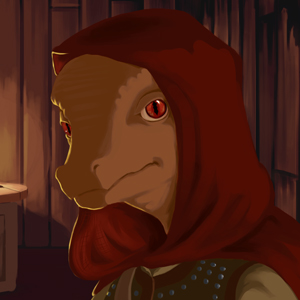 A cynical kobold who was raised as a noble in a kobold-run underground society. Generally weak and of poor health. The Kell household rose their way into leadership by portraying themselves as a family blessed with great command of magical forces, but in reality is a family of rogues, thieves, assassins, and cheats. When the kobolds demanded the Kell household use their magical forces to conquer the world as promised, Enden drew the short stick and was forced to leave the warren as a diplomat of "the world's impending destruction." Emboldened by his hatred for humans as well as his egotistical background, Enden left in stride before being kidnapped by a human slave driver, following a few days of travel.

After being rescued by a human bounty hunter, Ricketts, Enden and the other prisoners Weylis and Oldin continued onward to hunt down and assist Ricketts in claiming the bounty on the slave driver. After this adventure, Enden's perspective on the roles humans can play in his life was changed, and he offered to join Ricketts as a partner, to which he agreed.

Was last seen leaving a cave with a bounty hunter, satyr, and djin. The cave was then found to contain the dead body of a man, remnants of a large fire, and the dead bodies of a few animals. The man's face was unrecognizable.

Weylis : Satyr bard, carrying a shamisen, also a victim with Enden. Weylis left alongside Ricketts and Enden, but did not plan on staying with them long.
Oldin : A Djin who was captured by a slave driver alongside Enden, despite his immense hatred of anything reptilian.
Ricketts : A human bounty hunter who freed Enden, Oldin, and Weylis and enlisted their aid in hunting down his target -- the slave driver. Recruited Enden as a business partner following the events of Abducted.